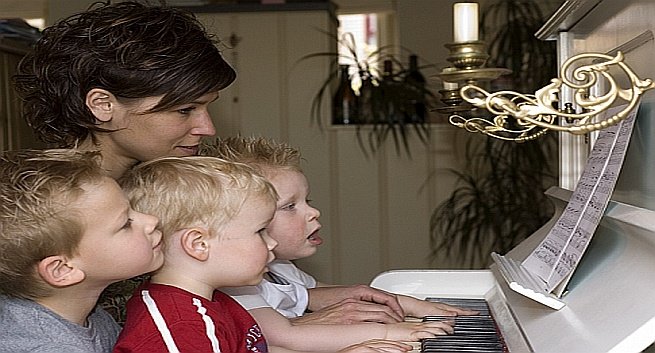 The Benefits of Music and Music Education on Children’s Brains

Study after study are showing that music education can make kids smart.  When your child learns to play a musical instrument, not only does he learn how to make tunes, but he also enhances other capabilities of his brain as well:

Why does this happen?  What is at work here? There are a number of theories.

One of them is that exposure to music offers many benefits to a child’s brain. It promotes language acquisition, listening skills, memory, and motor skills. Musical experiences integrate these different skills simultaneously, resulting in developing multiple brain neural connections

Researchers think that since piano and music-learning involve appreciating the length of notes in proportion to others (half-note has half-duration when played compared to whole note, etc), when a child plays music, he exercises the part of his brain that processes proportional thinking.

A grasp of proportional math and fractions is required for students to understand math at higher levels.  Children who do not master these areas of math cannot understand more advanced math which is important in high-tech fields.

Also, exposure to music improves spatial-temporal reasoning. This is the ability to see disassembled parts and mentally putting them back together. Math skills also depend on this kind of reasoning

Learning musical instruments also involves interpreting notes and musical symbols that the brain sees to form melodies – a series of sounds that vary with time.  Music making therefore enhances the brain’s “hard-wiring” for the ability to visualize and transform objects in space and time.

Also, learning to play music develops discipline that is beneficial to academic achievement.

“With music lessons, because there are so many different facets involved–such as memorizing, expressing emotion, learning about musical interval and chords–the multidimensional nature of the experience may be motivating the [IQ] effect,” said study author E. Glenn Schellenberg, of the University of Toronto at Mississauga.

A study by University of Southern California published in 2016 finds that learning to play musical instruments accelerates the brain development in young children, particularly areas that are responsible for processing sound, language development, speech perception and reading skills. In the study, neuroscientists found that auditory systems of children who receive music instructions were fine-tuned and could accelerate language development and reading, as well as other abilities.

A study from Boston Children’s Hospital suggests that learning an instrument also develops the brain’s executive functions which are coordinated in the brain’s frontal lobe. It allows the child to manage time and attention, organize his thoughts and regulate his behavior. These are skills that are important in school success, as well as in adult life.

Music also teaches your child that if he works hard at something, he will gradually get better. A life lesson that is also valuable in later life.

First Steps in Music for Infants and Toddlers

By John M. Feierabend, Ph.D. Musical behavior is basic to all cultures, both primitive and sophisticated. And yet, in our enlightened late twentieth century there appears to be plenty of evidence that many are losing this basic dimension of expressing […]

Beyond Twinkle, Twinkle: Using Music with Babies and Toddlers

From site: https://www.zerotothree.org/resources/1514-beyond-twinkle-twinkle-using-music-with-infants-and-toddler   Music has a power that goes beyond words. The pleasure of sharing music builds connections between parent and child as sounds and rhythms surround the child in a world of sensations and feelings. Music also offers a […]

The Benefits of Music and Music Education on Children’s Brains Study after study are showing that music education can make kids smart.  When your child learns to play a musical instrument, not only does he learn how to make tunes, […]

Benefits of Art for Kids

Children naturally love art – painting, drawing, making music, the theater.  Unfortunately, when schools cut back on budgets, the arts are usually the first to go.  It seems that schools do not appreciate the importance of art in building a […]